It's been a great year for equality and a great year for Antigone Rising. Those two things mean it's been an epic year for the entire staff here at Hangin' With Hendo. Here's a rundown of our top 5 moments. Coincidentally they are all in the first person and all center around me. Nobody else spoke up (or showed up, for that matter) at the staff meeting...

#5 - Torrey, Utah - Redrock Women's Music Festival
A perfect and heavenly location was the backdrop for a weekend in August that brought us together with one of our oldest best friend's, Michelle Malone, and now one of our newest, Toby, to create a magical 48 hours of pure musical bliss.

Sometimes you wish time would stand still. We are hoping to be back for 2014...


#4 - Pride Festivals!
We had the honor of headlining Northampton, MA and North Jersey Pride Fests this year. We love being invited to these events and look forward to playing on several more pride bills in the new year. Northampton Pride was especially amazing for me because I was accompanied by my sweet four year old son, Thomas. He helped Tony tech guitars and drums, he helped Julie sell merch, and he got to play sports with Roy (Julie's husband). Plus he went out to sushi dinner with the band.

#3 - The "Whiskey" video shoot!
In June we invited former members of Antigone Rising to get back in the saddle with us as we filmed a video for our song, "That Was The Whiskey." Directed by Mikki Delmonico, we spent an outstandingly fun day filming in our friends bar, 'Still Partners', in Sea Cliff, NY. There's not much to say other than roll the video below:


#2 - DOWN with DOMA.
On the morning of June 26th, I was sitting at my kitchen table incessantly hitting refresh on my computer awaiting the news on DOMA.
When it finally appeared on my screen I burst into tears. The kids were eating pancakes trying to figure out what was wrong with me. I told them it was a great day for our family and I was happy crying. That led to a barrage of questions on what 'happy crying' meant. I told them sometimes something so great happens, you cry from happiness. This led to a thousand more questions, completely taking me out of the moment that the Supreme Court struck DOMA down, forcing me to watch the recap on the news an hour later. Four is a great age.

Sarah and I headed into New York City later that day to be front and center for the historic event. We magically found an empty bar on the corner of Christopher & Gay St. with a window looking out on the square where Edie Windsor addressed the crowd. We soon realized it was empty because the air conditioning was broken. But that didn't break our spirits. Literally and figuratively.

And for the first time ever, we marched with the kids in New York City's gay pride parade that Sunday.


#1 - The Kiss on the Cover
"You might be the first person in our family to be on the cover of Time Magazine." - Things my Dad says...

Back in March, Sarah and I got a phone call asking if we'd be willing to come in to be photographed for Time Magazine's DOMA issue. We said yes, not realizing it would turn into an actual smooch on the cover of the magazine. It really made our week, and it will likely top my list next year and the year after as well. Read my blog post from the day the issue came out right here: The Kiss on the Cover. 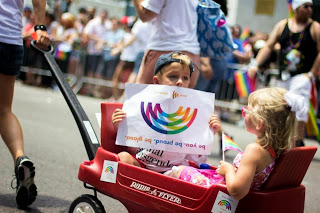